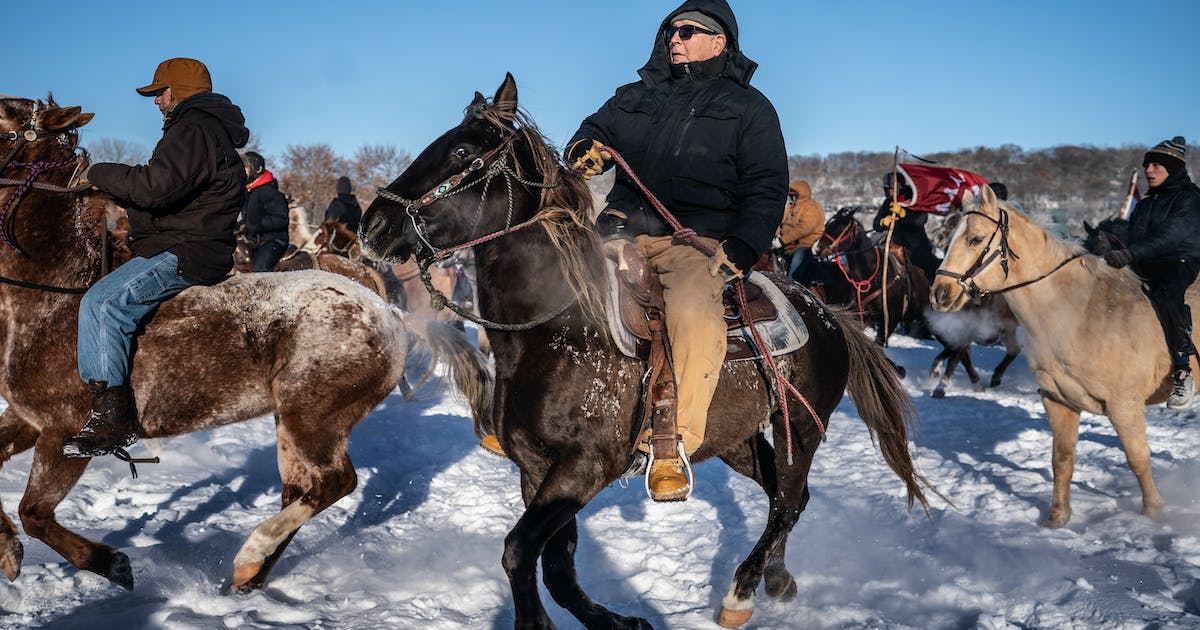 Prayers and grit kept a team of Dakota riders traveling by horseback through two snowstorms and long, frigid days this month on a journey through South Dakota and southern Minnesota to reach Mankato on Monday — Dec. 26 — to mark the 160th anniversary of the largest mass execution in American history and honor 38 of their ancestors killed on that day in 1862.

Every December since 2005, riders have traveled 330 miles on horseback from Lower Brule, S.D.. The journey retraces the route of their ancestors who were forced out of Minnesota and onto a reservation in South Dakota, following the executions in Mankato and a deadly winter in a concentration camp at Fort Snelling.

In Mankato on Monday morning, hundreds of people cheered the riders’ arrival, and listened as the names of the executed were read — the 38 killed Dec. 26, 1862, and two others later captured and hanged — together known as the Dakota 38+2.

“I felt the ancestors protected us and were with us all the way,” said rider Andrea Eastman, reflecting on the journey through blizzards and deadly cold.

Asked how he managed to keep going through the punishing conditions, rider Darrian Rencounter pointed to his thick black snow pants. “These!” he said.

Todd Finney said his uncle, spiritual leader Jim Miller, organized the ride in 2005 after having a dream.

“He prayed,” said Finney, who now helps organize the ride. “And someone forgotten by society started a movement.”

Seventeen years later, the ride has attracted the attention of the public, the media and powerful officials. And while this iteration of the ride is coming to an end, Finney said, with the last of the ride’s original organizers stepping back. But the work to remember and honor the Dakota 38+2 is just beginning.

The procession entered Mankato just after 10 a.m. Hundreds of people gathered to watch as the horses — their manes fluffy from the wind and their haunches caked with ice and snow — carried the riders north on Riverfront Drive to Reconciliation Park.

A man fanned sweet smoke from a bundle of sage across the crowd of all ages gathered in the park. A woman yelled to clear the street as the riders drew near.

“As we come this way, more people gather,” Eastman said. “By the end of the ride, we have like 100 riders.”

Two runners joined the procession as the riders arrived. They had set off from Fort Snelling at midnight, running through the night in teams of two down Hwy. 169 to Mankato.

“This is good medicine,” said Delilah Rouse of Sioux Falls, S.D., as she took in the crowd amid the sound of drums and singing.

She remembered being angry when she learned about the executions and how hard it was to persuade her white classmates to care about their shared history.

“We carry this stuff with us,” Rouse said.

The crowd Monday made carrying the burden of history a little less lonely, she said.

For those who grew up hearing about their ancestors’ executions and their families’ forced exodus from Minnesota, Monday’s ceremony was painful.

“I heard the stories when I was little,” said Josette Peltier, a descendent of those executed in 1862. “It still hurts to this day.”

Those who gathered to watch the riders’ arrival included indigenous and white Minnesotans. Peltier said it was time for the descendants of immigrants to Minnesota — those whose arrival pushed the government to remove Dakota people — to share the burden of history.

Finney contrasted the riders’ welcome Monday — the cheers of hundreds, a police escort and an apology from Gov. Tim Walz — with the first ride in 2005, when participants said they were shot at and looked on with hostility by law enforcement. That wasn’t that long ago, Finney said.

He said he feels hopeful that people in power are finally beginning to account for the past.

The work to come

He apologized for the executions and the removal of riders’ ancestors, and for so much done since the state of Minnesota was established on indigenous land.

“Saying we’re sorry from the people of Minnesota is the very least we can do,” the governor said. “What are we going to do going forward?”

“Remember the horrors of 160 years ago, and make sure it never happens again,” Kunesh said.

Watching the riders arrive, high school history teacher Sarah Han of St. Paul said she is committed to teaching about the execution in an effort to ensure her students have a fuller picture of President Abraham Lincoln. Yes, he signed the Emancipation Proclamation, but just days earlier, he had signed orders to execute the Dakota warriors, after reviewing the cases of 300 men sentenced to death following the U.S.-Dakota war.

“History has become all about critical thinking, giving students the tools to find out the truth,” Han said.

Ethnic studies is required for some schools in Minnesota, and the Legislature is likely to consider a bill this session to make the requirement statewide.

The ceremonies in Reconciliation Park, growing larger each Dec. 26, have been important for Joanna Meyer of Mankato. She said she is moved by the riders’ determination and every year has been a reminder of history and forgiveness. Meyer said she worries that if the annual remembrance ride ends, those lessons could slip away.

“For this ride, it’s the last,” rider Eastman said. “But we’ll be coming again. Stay tuned.”